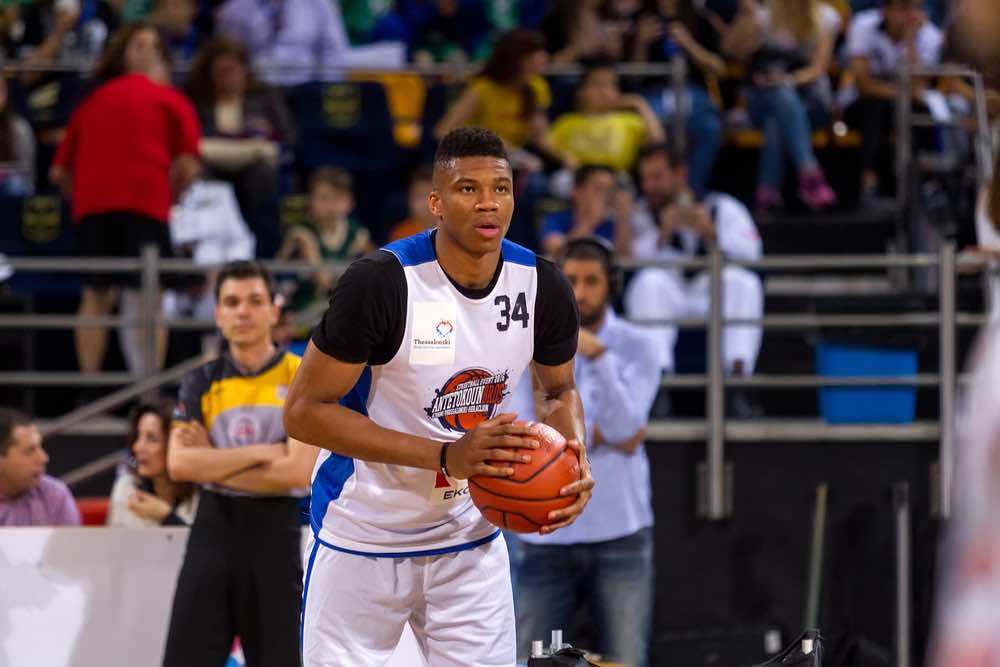 Hailing straight from Athens, Greece, Giannis Antetokounmpo took the basketball and shoe world by storm. Even at the young age of 25, this basketball player was named league MVP and had the opportunity to create a line of shoes dedicated to him and his talents. Thus, his Zoom Freaks were created.

However, there are a lot more details in between his early career and his shoe design that are worth noting about this star basketball player. For everything you’d want to know about Giannis Antetokounmpo and his shoes, keep on reading.

Giannis and the NBA

As you probably know now, Antetokounmpo is a prominent player in the NBA, currently a player for the Milwaukee Bucks. However, it took a bit of work and a lot of travel for Antetokounmpo to get where he is today.

As we mentioned, Antetokounmpo, originally “Adetokunbo,” was born in Athens, Greece and spent most of his early years growing up there.

His parents were immigrants from Nigeria and, despite being born in and living in Greece, Antetokounmpo couldn’t get citizenship in either place until he was 18 years old. Once obtaining citizenship, his last name was officially changed to Antetokounmpo.

While growing up, Antetokounmpo found a love for basketball. He ended up joining his neighborhood’s youth basketball team, called Filathlitikos in the year 2009. By 2011, though, Antetokounmpo’s talent in the sport was clear.

He ended up sticking with Filathlitikos and playing on their semi-pro team in third-division basketball games. The next season, he was playing second-division.

A basketball club in Zaragoza, Spain, ended up taking a liking to Antetokounmpo, and he signed a four-year deal with them that included NBA buy-outs. Before his season started with CAI Zaragoza, though, Antetokounmpo stuck it out one more year with his original team, Filathlitikos. This ended up being one of his most outstanding seasons yet.

He played 26 games that season and averaged almost 10 points per game, with five rebounds and one block. As a teenager, this was unheard of.

Once 2013 rolled around, Antetokounmpo became eligible for the NBA draft for the first time. He ended up being drafted by the Milwaukee Bucks, being their 15th selection overall. He signed a rookie-scale contract with them, and, at 18 years old, became one of the youngest NBA players the association had ever seen.

During his first rookie season with the Bucks, Antetokounmpo sure made a name for himself. Here, he was averaging almost 7 points per game. After the season ended, he had made a total of 61 blocks–more than any other rookie at the time. He was even placed in the top ten for most blocks made by a rookie on the Bucks team.

As he continued his career with the Bucks, his talents only rose. During his third year, Antetokounmpo ended up scoring 27 points in a single game against the Rockets. This was really where the world stopped underestimating what Antetokounmpo could do.

Soon after that game, Antetokounmpo was named the Eastern Conference Player of the Week. And, a month later, he ended up breaking his record of 27 points in a game, to scoring 29. For the rest of the season, Antetokounmpo kept setting and then breaking his own records, game after game. Finally, he stopped being regarded as a rookie.

After three years of having a rookie contract with the Bucks, they ended up offering Antetokounmpo a $100 million dollar extension contract. For the next years to come, Antetokounmpo was consistently recognized as being one of the best players in the league, especially for the Bucks. He was scoring 20, 30, even 40 points per game, impressing everyone on the court and at home every time he played.

Antetokounmpo was winning awards left and right, and even became a part of Bucks’ history with his over-40 points-in-one-game stunt. But, better than all of that, Giannis Antetokounmpo was eventually named the league’s MVP back in 2018. He was the 2nd Bucks player ever to do so, and he was the third-youngest person to win, as well.

In 2019, Antetokounmpo became the first international basketball player to have his own line of Nike shoes. While this is an incredible feat for any person, for Antetokounmpo, this meant the whole world.

How it Came to Be

When Antetokounmpo was first getting into basketball, his family was never wealthy enough to purchase him a pair of high-quality shoes. His older brother had a special pair of Nike Kobe 4s, and Antetokounmpo knew he needed a pair just like them.

Of course, his older brother would never share. So, Antetokounmpo would steal his brother’s shoes either in the night or when he was away, walk them miles to basketball practice, and get the enjoyment of playing his favorite sport in the proper footwear.

After myriad arguments, the boys just started to share their sneakers regardless. Soon, Antetokounmpo invested in his own pair of high-top Nike Dunks and they became his only pair of basketball shoes for the next three years of his life.

As he continued falling in love with shoes, he would ask his teammates if they had extras, totally disregarding size. No matter what it was–how big or how small–Antetokounmpo loved his Nike’s.

When he first started playing for the NBA, Antetokounmpo only had a handful of basketball shoes. But, right before his rookie season officially began, he signed a deal with a company that would change his life forever.

Nike took a chance with Antetokounmpo, giving him a deal that not only left with him thousands of pairs of shoes, but one that allowed him to create one of his own, too.

It was late September of 2017 when Nike proposed the idea of a signature sneaker. Already being shocked about his deal with Nike in the first place, Antetokounmpo was completely taken aback by the idea. At the time, Antetokounmpo was being thrown brand deal after brand deal, but no company meant as much to him as Nike did.

With an agreement and a contract, the Zoom Freak 1 was in production.

Inspired by family and home, Antetokounmpo’s Zoom Freak 1s incorporated the phrase, “I am my father’s legacy,” into the soles of the shoe to help give tribute to his late father. The first edition of Giannis Antetokounmpo’s shoes came in three different styles: black and white; “Rose” which reflected his father’s favorite colors of red, white, and gold; and “All Bros,” a navy and orange style.

The shoes themselves are built specifically with enhanced traction and lockdown forefoot support for added comfort and accessibility when wearing. They’re cushy and light, but still supportive enough on your heel and sole.

The four straps on the shoes are meant to represent his brothers and their strong bonds, keeping Antetokounmpo grounded whenever needed. There’s even an extra-cushioned heel to help give you a bouncier step and nice, supported landing.

Now, the Zoom Freak 1s come in various colors, more than the original three. No matter what kind of color pattern you’re looking for in some family-oriented basketball shoes, Giannis Antetokounmpo’s shoes will match your style perfectly.

A few years after Nike saw the popularity of the Zoom Freak 1, they decided to partner with Antetokounmpo again and craft the Zoom Freak 2. This signature shoe was released just this year, but is already one of Nike’s most popular shoe lines.

While the original Zoom Freak 1 had Zoom Air support in the heel, this one has it in the forefoot. By moving it up, you’re given more support in better places, allowing for easier, more comfortable movement. These shoes are all about the comfortability, too, with Nike ensuring that it is properly cushioned with added support and bounciness.

Playing off the enhanced traction on the first shoe, Giannis Antetokounmpo’s Zoom Freak 2 has a molded thermoplastic polyurethane strip on the bottom of the shoe to help stabilize your footing and keep you from slipping, no matter what surface you’re on. Like the Zoom Freak 1, this shoe is still super lightweight and easy to move around, not dragging your feet around like other heavy, clunky shoes tend to do.

With the Zoom Freak 2, you can choose to purchase Antetokounmpo’s original design which is a black and white shoe with an animal print Nike logo. Or, you can customize and completely design your own! Antetokounmpo is truly putting the style of his shoes right into your hands.

It was clear that Giannis Antetokounmpo’s shoes were going to be a hit when practically every NBA player was spotted wearing them. No matter what team they were on or where they were playing, the Zoom Freak 1s were all over professional NBA basketball courts across the country.

They also received quite overwhelming success when first released, too. This shoe became Nike’s largest signature shoe launch in history. It’s estimated that he made at least $9 million from the launch of his Zoom Freak 1s.

Antetokounmpo’s Zoom Freak 2s were also a hit, though only recently being launched a few months ago, we’re still seeing people discover the unique aspects of this brand-new shoe. This shoe was actually influenced in part by the late Kobe Bryant, causing many to flock to these to help pay tribute, too.

Today, the Zoom Freak 1s and 2s are still some of the most popular shoes that Nike has sold, especially in partner with an NBA player. Each day, too, they’re continuing to make sales.

Where to Find His Shoes Today

If you’re interested in getting yourself a pair of Giannis Antetokounmpo’s shoes, you have a few different options for doing so.

One of the easiest, most straightforward ways of finding Antetokounmpo shoes is through Nike’s website directly. Here, you can pick out the pair that you want in the color and style that you want, and in the perfect size, too. You can also learn all about these shoes through their website, as Nike gives you a quick inside look into how these shoes were crafted (kind of like how we did).

By ordering through Nike, you can have your shoes shipped right to your house. It’s also the only place where you can properly customize your Zoom Freak 2s if you so choose. But, occasionally, Nike will be out of stock on some sizes, so you may have to try elsewhere.

If you don’t want to pay the full price for your Zoom Freaks, you can turn to Amazon. Surprisingly, Amazon has quite a wide selection of these shoes, both new and used.

These are also shipped right to you, and they may show up a bit quicker than through Nike. It’s a great place to check when Nike is out of certain sizes. Plus, with Prime Shipping, you may see some personal discounts!

Of course, shoe stores like FootLocker, Dicks’ Sporting Goods, and even Big 5 have been known to carry Antetokounmpo’s shoes as well.

These places will sell their shoes at similar prices as Nike, and they have more sizes available. Plus, buying them at a shoe store does give you the opportunity to try them on for yourself and see how much you love these signature shoes. But, the decision is ultimately up to you!

Getting Yourself a Pair

All in all, Giannis Antetokounmpo’s shoes are not only stylish, but they have an incredible story behind them.

These shoes demonstrate a long journey of hard work, dreams, and going from rags to riches. Antetokounmpo’s signature Nike shoe line is a beautiful example of an inspirational shoe origin.

For other shoe origins and stories behind your favorite pair of sneakers, check out what else we have to offer.